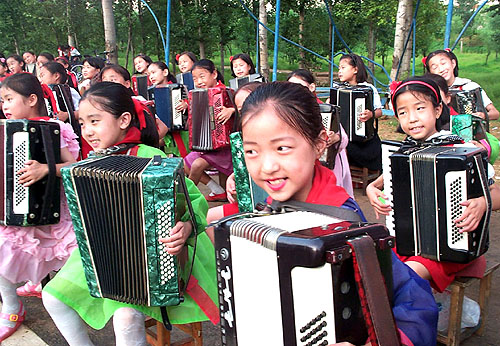 It’s not news that this country has gotten dumber. What’s frightening to me is how we’ve become a country that embraces dumb. I think most people would agree that a country is best judged by its tv game shows, and today, the three most popular are “Wheel of Fortune,” “Deal or No Deal,” and “Are You Smarter Than A Fifth Grader?”.

“Wheel,” of course, rewards people for figuring out phrases with certain letters missing. I actually saw someone buy a vowel when they were looking at a board that said ‘M__nt R_shm_r_.’ You can figure that one out pronouncing it without the vowels! “Deal” requires even less cognitive skill than “Wheel,” since the entire show consists of GUESSING. But the worst is “Fifth Grader,” which gives out huge sums of cash to adults who have to prove they know more than eleven-year olds. Here’s where they’ve got it wrong—the show should in fact punish the grownups who don’t win–if you’re not smarter than a fifth grader, you should be put in some sort of internment camp so we can isolate the dullards and prevent them from breeding.

Sadly, we seem celebrate mediocrity in America. Who is mentioned in any election as the bellweather for any issue?—the ‘average’ American. Not the best or brightest American, but the ‘average’ American. Pardon me for not jumping on some Capra-esque bandwagon here, but should policy really be dictated by the law of averages?

It’s too bad a candidate for elected office can’t say things like “My opponent is a good person with a beautiful family, but the fact is I AM MUCH SMARTER THAN HE IS.” Or, “I’m not worried about attacks from my opponent, because THEY’RE STUPID.” Read the speeches of great leaders from the past–they didn’t speak like the average Americans of their time. They used nuanced concepts, polished turns of phrase, and really big words. Lincoln never felt the need to sprinkle in some ‘you betcha’s and ‘darn right’s just to connect with people who are ‘average.’

Not to offend any dactylonomists reading this, but this country needs to start celebrating smart people. Why do we think it’s good to be average? In game show terms, that’s the $64,000 Question. To paraphrase Barry Goldwater, elitism in the defense of intelligence is no vice, and stupidity in the defense of mediocrity is no virtue. We should be aiming for the top, and by definition, ‘average’ means somewhere in the flabby middle.

Thankfully, we will always have the North Koreans when we want to feel superior. By this I mean the government of North Korea, not the ‘average’ North Korean. Now I would be worried about offending North Korea, but since their Great Leader doesn’t allow them access to the internet (or, for that matter, food), I’m probably on safe ground.

In their latest saber-rattling, rather like an eight-year old stomping his feet, Pyongyang wanted attention. So they launched a rocket. At this point, I think the world is more afraid of a North Korean lunch than a North Korean launch. This time, according to Jane’s Defense Weekly,

“The…rocket fired …and apparently did not boost a satellite into space…because no satellite has been detected by numerous space tracking systems. As for the rocket itself, only the first stage appears to have worked. The other two stages fell into the ocean, taking the payload with them.”

At this point, North Korea would be more intimidating if it rattled actual sabres at people.

Since the DPRK says it wants dialogue with the West, and since President Obama is busy at the moment dealing with countries which are…important, I am offering my services for the purpose of this dialogue. One of the most entertaining websites I visit is the official news agency of the ‘Democratic’ ‘Peoples’ Republic of Korea (click here for the English version). The following is an actual ‘news’ item from the website—the parenthetical comments would be my ‘dialogue’ with the North Koreans.

Pyongyang–It is foolish of the United States (great–the opening sentence sounds like something from a fifties sci-fi flick–“Your feeble Earth weapons are useless against us!”) to try to stifle the DPRK with its hard-line policy, says Rodong Sinmun (wait–didn’t Rodong lose to Mothra?) today in a signed article. It says:
The U.S. is working hard to isolate the DPRK under the pretext of “military threat” and “missile threat” from the DPRK and “threat” from its conventional forces after terming it “no. 1 enemy” but this is a folly (maybe so, but at least it’s not annoying like your use of “quotation marks” ), in utter ignorance of the stand, strength and will of the DPRK (although the people’s strength and will is a bit less than it used to be, what with rampant starvation, no jobs and and not a whole lot of foreign aid, you isolationist bozos).
In the 1990s, too, the U.S. was defeated in confrontation with the DPRK (known to historians as The War That North Korea Imagines).
The DPRK reacted to the U.S. frantic nuclear blackmail and war moves with a super hard-line stand (OMG it was like super hard-line!). It dealt a heavy blow to the U.S. and its followers by taking such countermeasures for self-defence as withdrawing from the nuclear non-proliferation treaty and declaring a semi-war state (very cagey–if we only declare “semi-war,” they might not bomb us out of existence).
The DPRK has become a powerful country which the U.S. dare not provoke and the U.S. lost its face before the international community (ok–beyond the grammar problem,you guys are kidding now, right?).
The U.S. failed in its policy to stifle the DPRK (damn–now I guess we’ll have to go back to ignoring them).

So as to not paint an unfair picture of the North Korean people, I’ll end this with a picture from the same official website (I’ve translated the caption from the original Korean):

Here is an example of the beneficence of The Great Leader Kim Jong-il, as he has given every child in the Republic a new accordion. Those smiles say “Thank You Great Leader, We Are Very Hungry But Are Grateful For Our Accordions!”

Posted 7 May 2011 by goodwriting in category "COMEDY